The #storybombingSydney project brings to the city immersive and playful encounters with bite-sized Australian literature through text, voice, audio and visual elements. Whether via low or high tech (from pavement chalk and fortune cookies to time-lapse recording, decal transparencies, digital riso printed billboard posters, large-scale projections or sounds generated from text), throughout the story bombing, commuters will be bombarded with 200-word microliterature curated by Sydney-based publisher Spineless Wonders. 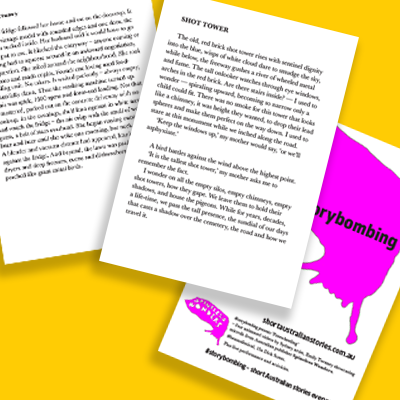 I am working in collaboration with Bronwyn Mehan, Dominic Svejkar,  Jack McAuley and Richard Holt on the creative concept and visuals for the #storybombingSydney project, which is curated by Bronwyn Mehan of Spineless Wonders.

Expect the unexpected when trees are no longer sacrificed for fiction but enlivened with it; when transparent decals temporarily transform glass and metal surfaces into pages. A queueing commuter munches on a ‘fiction cookie’ while listening to a story in a tin can on a string, and is treated to a beautifully-wrought, mind-bending narrative in the time it takes for the 423 to arrive.

In the tradition of Arthur Stace’s iconic Eternity, I will chalk the walk to the transport hubs of Martin Place and Green Square with stories by writers from across Australia. Time-lapse cameras will document the disintegration of these ephemeral texts under commuters’ feet and, days later, sound and video artists Dominic Svejkar and Jack McAuley will restore them as video projections enhanced by voice and soundscapes. Outdoor and indoor screens will flash with Richard Holt’s mesmerising videos featuring soundscapes by emerging Sydney composers.

The city is full of stories — we know, we’ll put them there. Stories from city, regional and rural life; stories of addiction, online dating, dogs and dreams, handbags and holdups, mermen, global warming and Phraseo, the rogue editor.